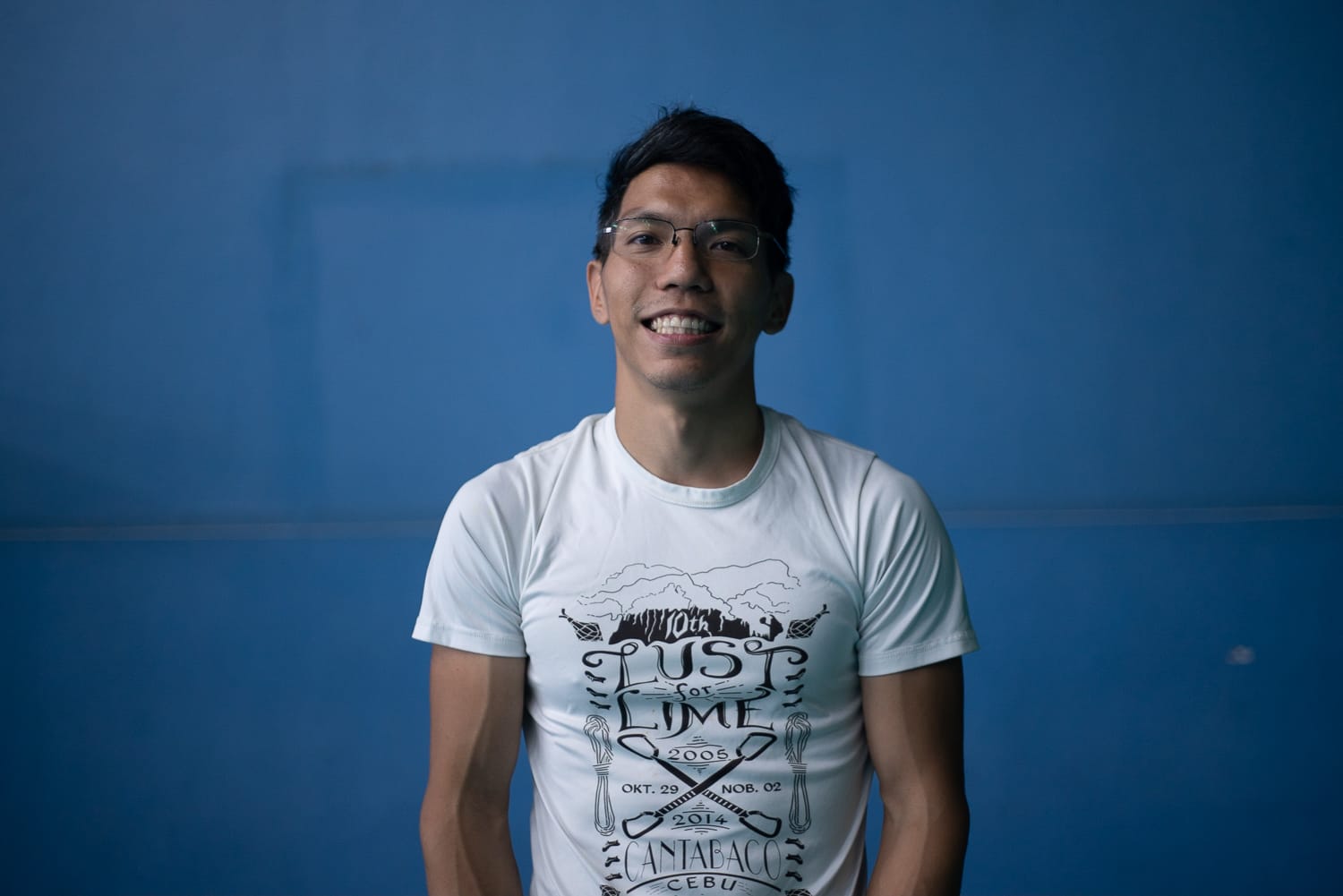 In this second edition of What's In Your Bag, we peered inside Andrew Robles' climbing bag.

We caught up with him at the gym after a day trip at Montalban, Rizal, and he showed us just what kind of stuff he brings outdoors. 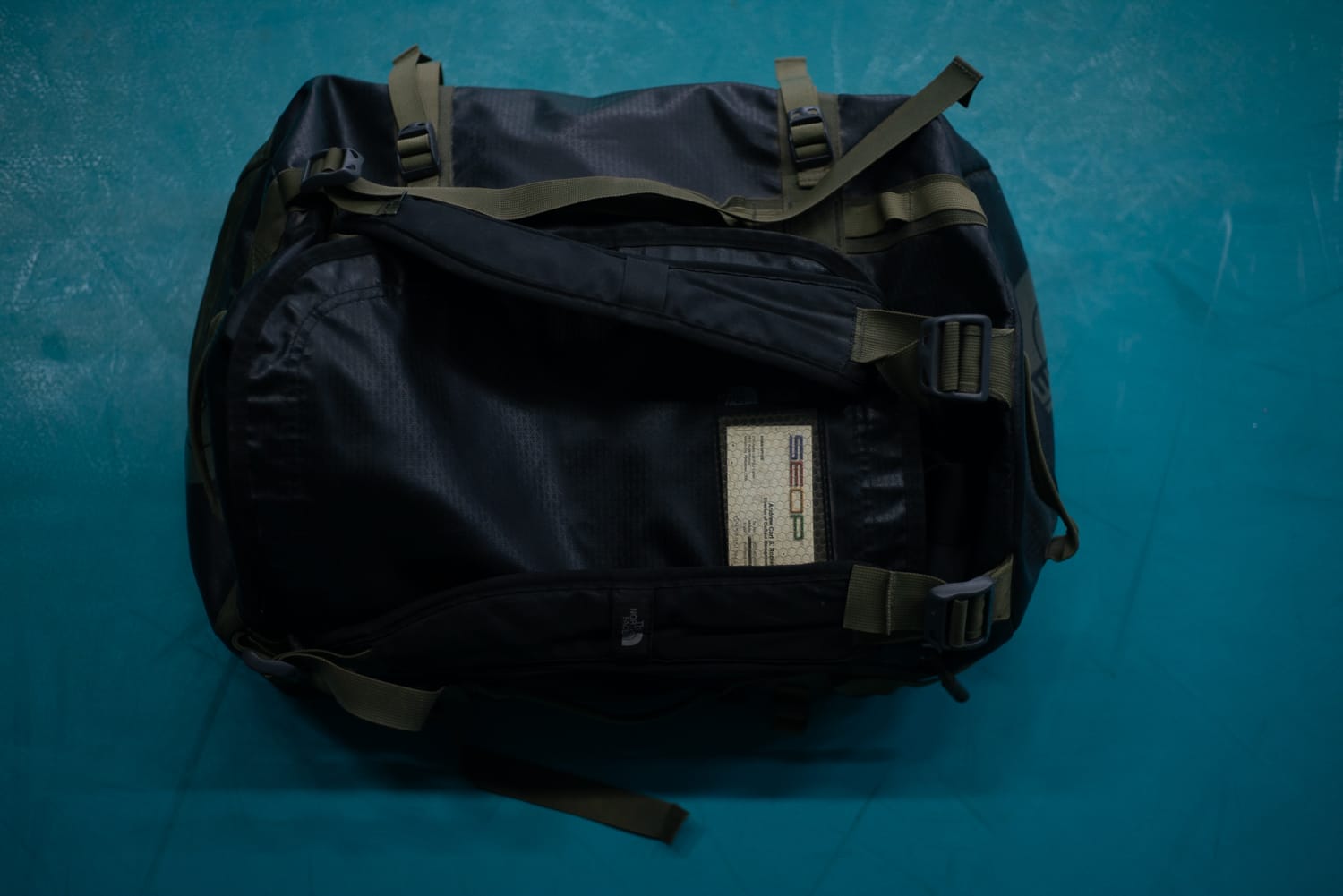 Dru: I got it because it’s the biggest size that I can bring [as a] hand carry
Send: How long have you had it for?
Dru: Around two years.
Send: It’s mostly your crag bag?
Dru: Yes, because it’s comfortable and it’s really easy to get stuff out of it. I used to hike and mountaineering bags tend to be narrow so you need to dig in.

Send: How often do you go on [climbing] trips?
Dru: This year, as much as possible but it depends on the season. During the rainy season, it was hard to get out. When the rain stopped, I tried to go almost every week, every two weeks.

Send: What do you make sure to always carry when you go outdoors?
Dru: Okay, let’s start from most important to least important. Most important, shoes. I have two pairs of shoes for lead climbing because I have a loose pair which is just for warming up and endurance routes. Then I have an aggressive pair for projects or redpointing. So, two pairs of shoes. 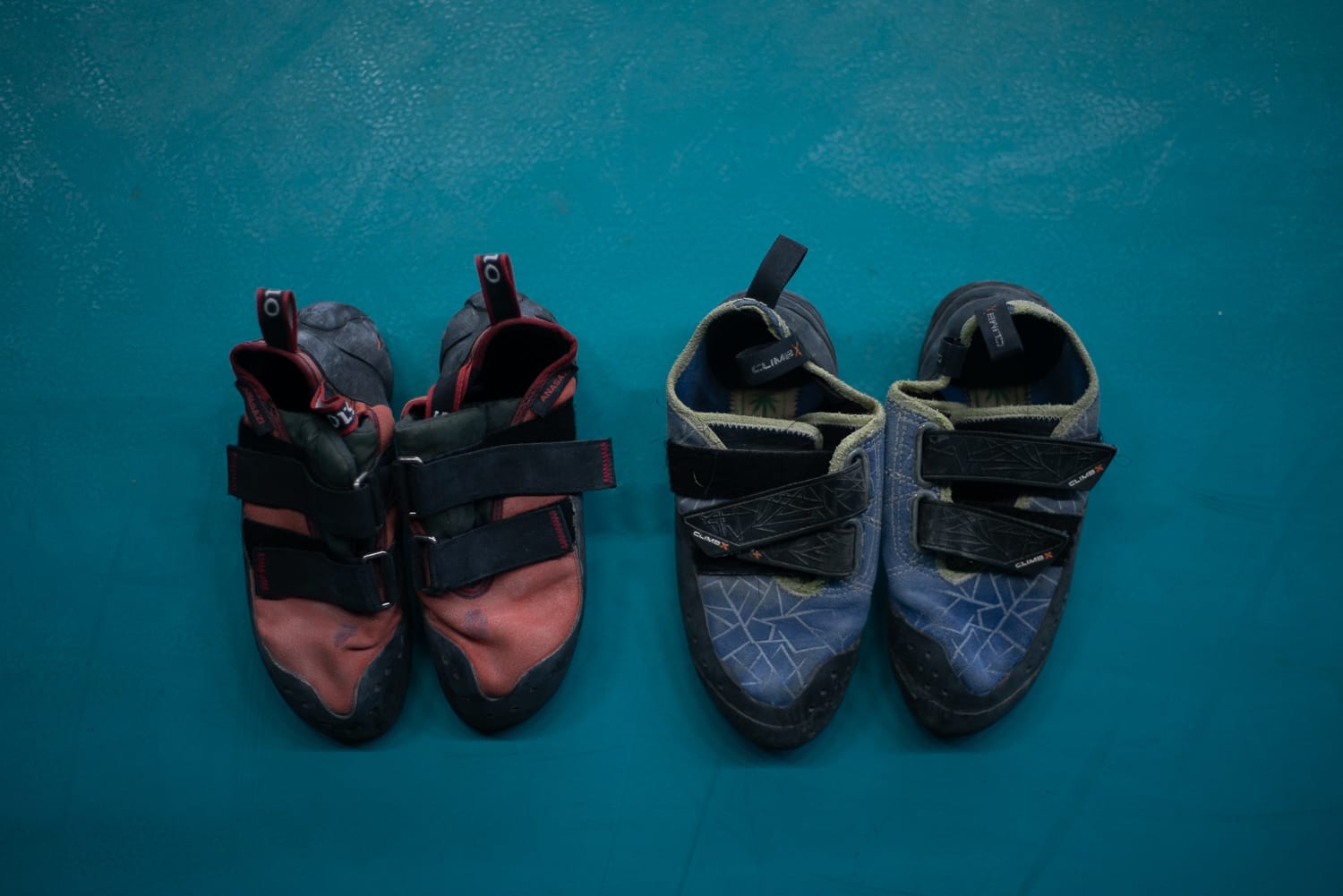 Send: What are your shoes?
Dru: [The] loose pair is Climb X, I don’t know what model. But I got this when there were no other shoes available a few years ago. It’s not anything special, it’s just like a workhorse na shoe. The other shoe is my favorite shoe, it’s a 5.10 Arrowhead. It’s pretty aggressive. Actually pinabili ko ‘to sa Canada on sale and I bought two pairs kasi nag sale siya and at the same time, [it was phased] out.
Send: How long have you had that pair?
Dru: ‘Yung original pair, mga two years [old], and then the new one, I got it middle of this year lang (note: this interview was conducted in 2018).
Send: Oh, so that’s a new pair?
Dru: This is the new one. Then I have one that’s mint condition.
Send: You don’t use the first pair anymore?
Dru: No because I wanna have it resoled, and if you use it too much then it’s harder to resole pag nabutas na yung taas.
Send: Why do you like the 5.10 Arrowhead?
Dru: It’s a really good fit for me. It’s aggressive but it’s stiff. I’ve had other aggressive shoes na parang ang nipis, like yung Scarpa Boostic or Booster S. I can’t put any power down. This one is stiff enough that it gives you power but toe down so [it’s] aggressive. Good for edging, and good for precision. And then the heel fits really well also, it doesn’t come off. 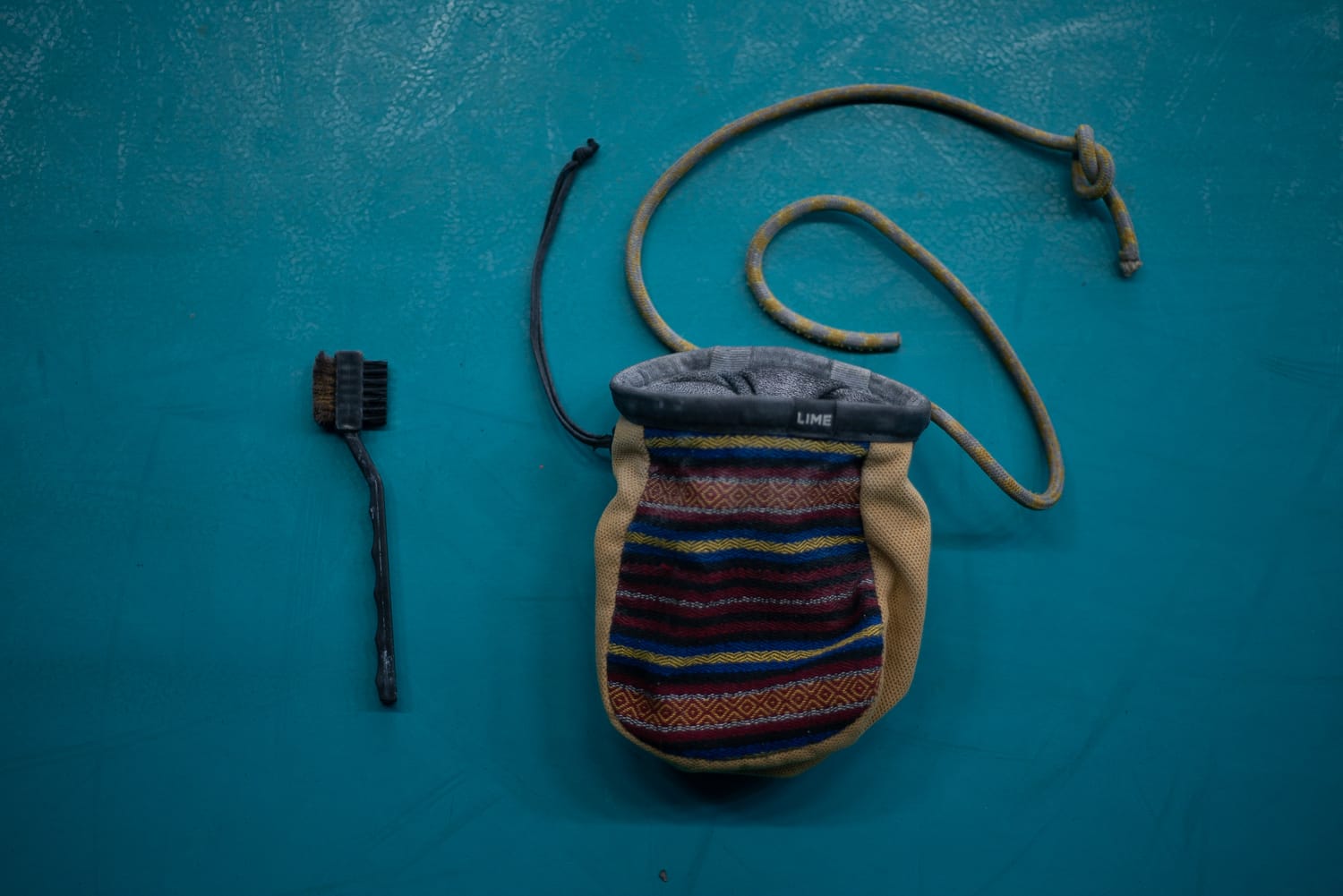 Dru: I have my lime chalk bag. I changed the strap to a cord. It’s more for emergencies. If I need to anchor or if I need a prusik in the middle of the climb then I can just take off the chalk bag and use the cord for emergencies.
Send: Did you ever have to use the cord?
Dru: So far, not yet. The disadvantage lang is a few times during a climb natatanggal sya because I didn’t knot it properly.
Send: It fell?
Dru: Yeah. Like in the middle of a hard climb. 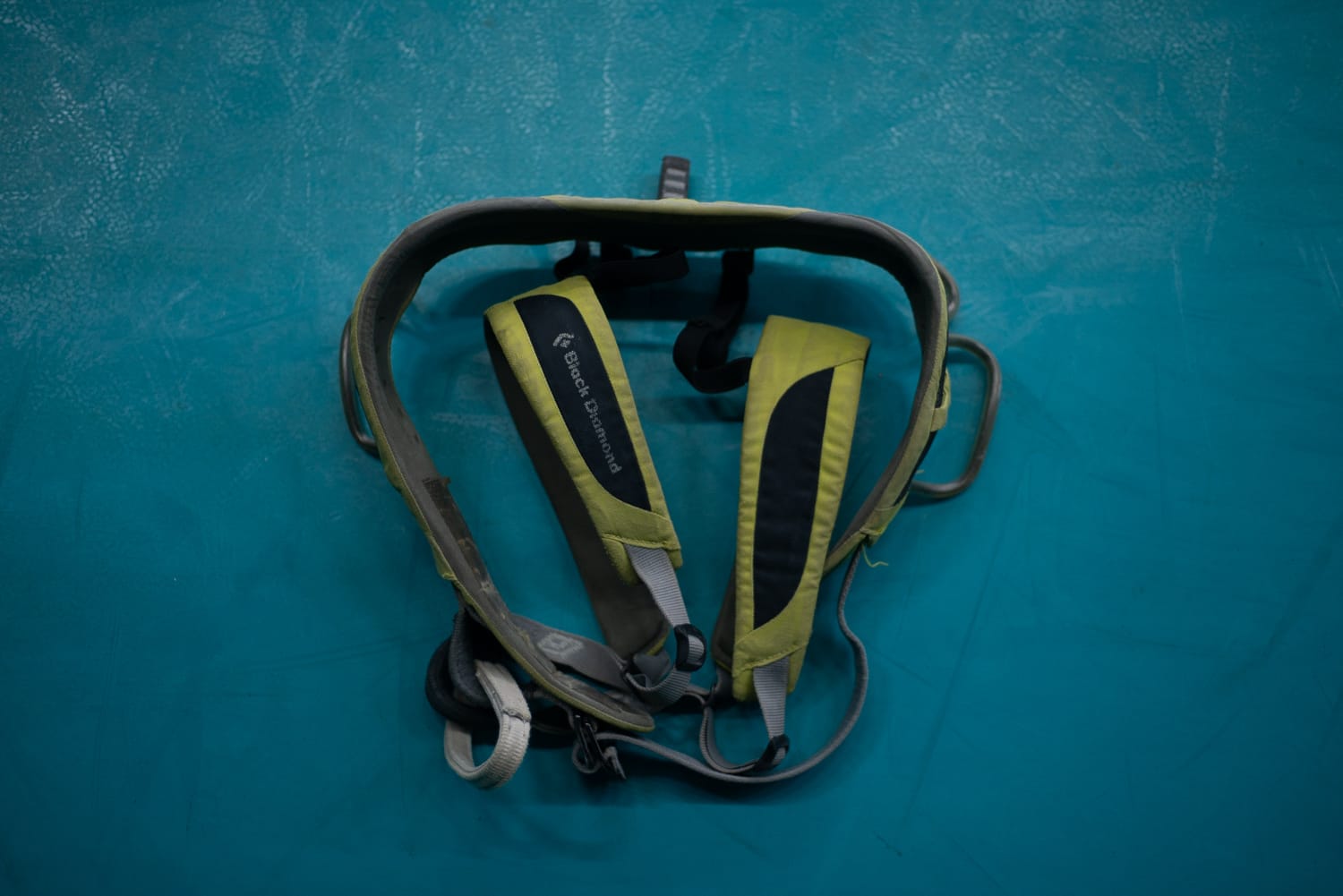 Dru: My harness is overdue. I have to replace it this year.
Send: When do you say that you want to replace it? Does it feel or look different?
Dru: Usually the manufacturer says five years. It depends on the manufacturer, but usually five years ung shelf life nya even if you’re not using it. And it’s also starting to rust.
Dru: When I bought this, I was just starting to get back into climbing
Send: You stopped climbing?
Dru: Yeah, I started again mga three and a half years ago.

Send: Why did you stop?
Dru: A lot of reasons. I never really stop stopped, like I would still climb every so often but I didn’t take it seriously. For a while, medyo nag decline ung climbing in general, like they stopped having competitions. I started competing really early- if I started climbing at 11, I started competing at 12, so competitions were all that I knew before, and then hindi naman uso mag outdoor dati kung hindi ka mountaineer or hardcore. It (climbing outdoors) wasn’t as accessible before. So when the competitions stopped, I lost my motivation. At the same time even when they were still going, I wasn’t winning. I wasn’t on the trajectory that I wanted to be. I would get third place, second place sa nationals when I was like 17. But then, for a long time after that, I wouldn’t progress- I’ve never gotten first place sa nationals.

Send: So that discouraged you?
Dru: That, and the fact that [the competitions became less and less]. So before, we used to have three or four national competitions a year, and then it became one a year and then it became one every other year. So not only was I not winning, but at the same time, it was harder and harder to win because you get fewer opportunities. So I stopped and then I got into mountaineering and focused on school.

Send: How long did you stop?
Dru: Around six years. I mean, I never really stopped but I stopped being competitive. I’m not competitive now but now I have other motivations na competitive in the sense of climbing hard, competitive against myself. 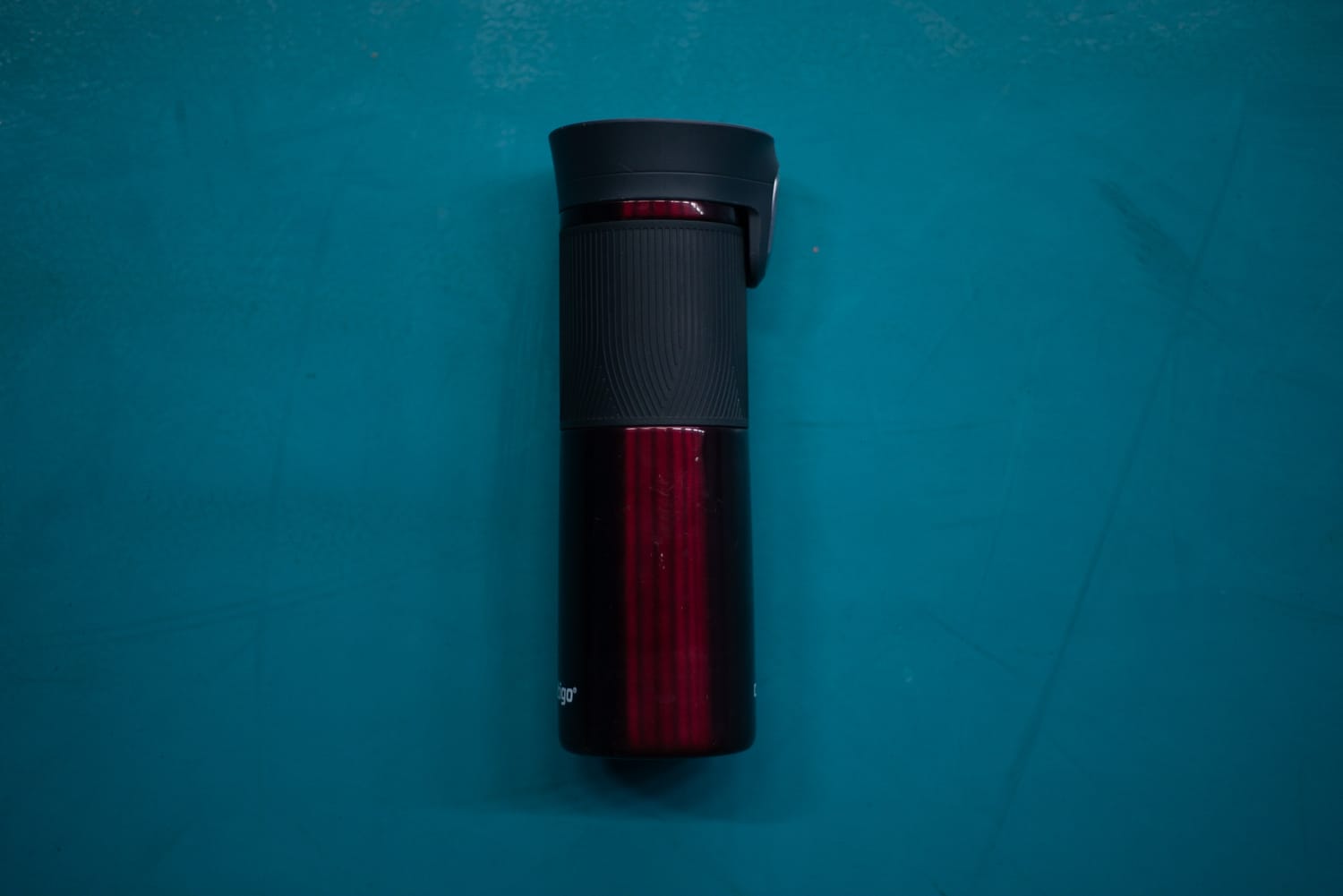 Send: Back to your stuff- what’s the next one that you find is an essential for you?
Dru: Coffee. Always have coffee. I was gonna say belay device, but pwede namang humiram ng belay device. It’s really hard to climb without coffee. 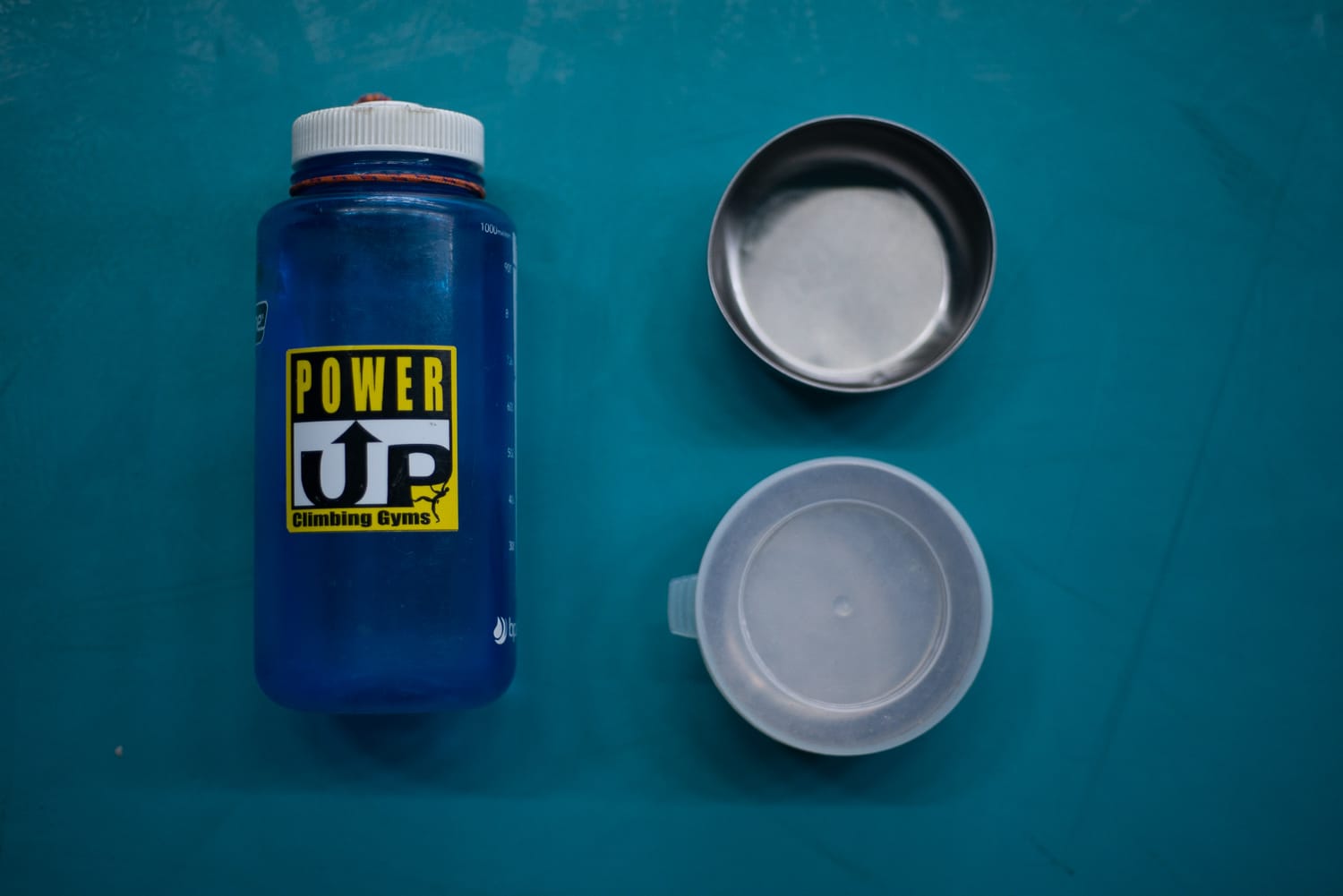 Dru: I usually bring one liter for a day trip because I also have coffee, but if I didn’t have the coffee then I’d probably need more water. 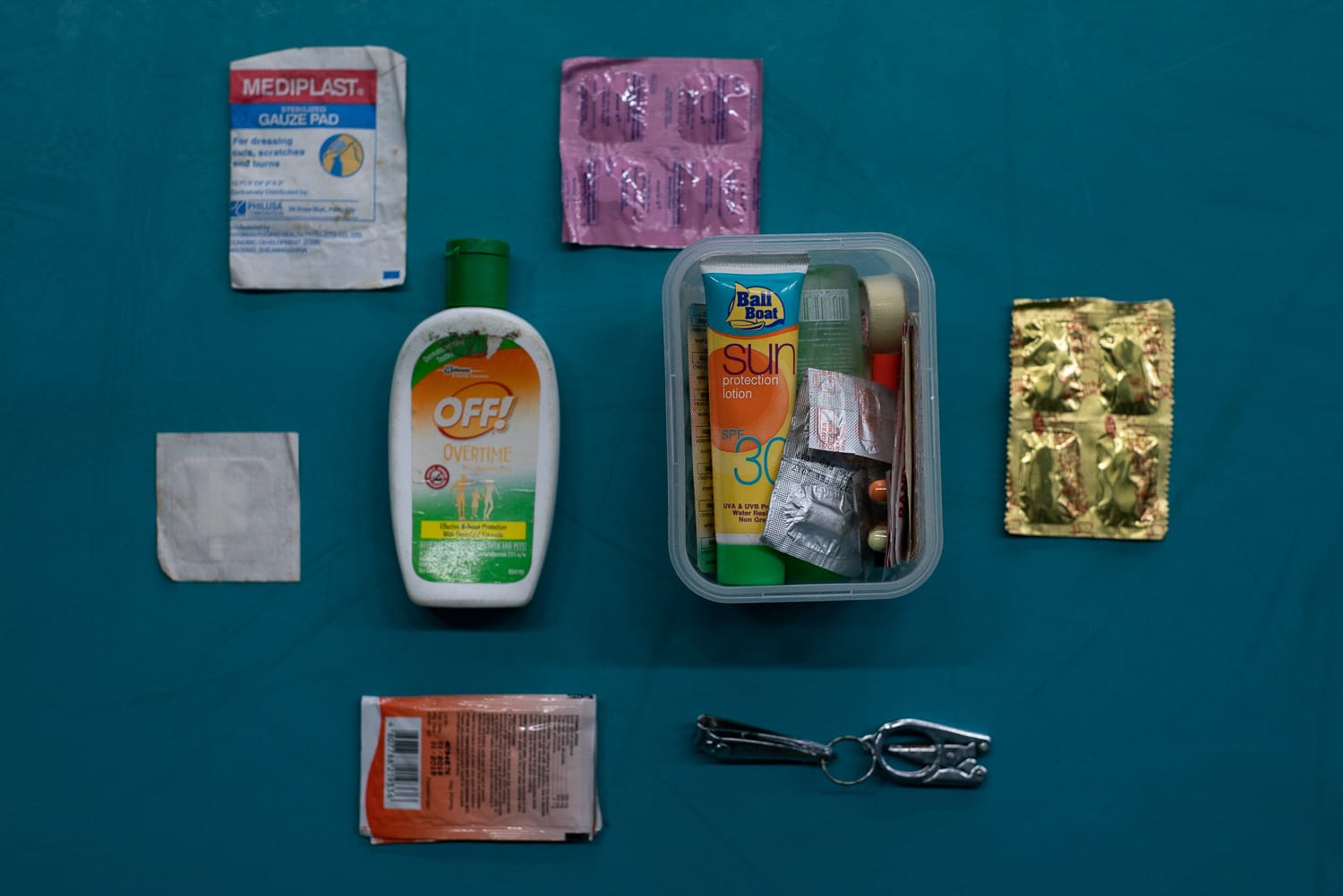 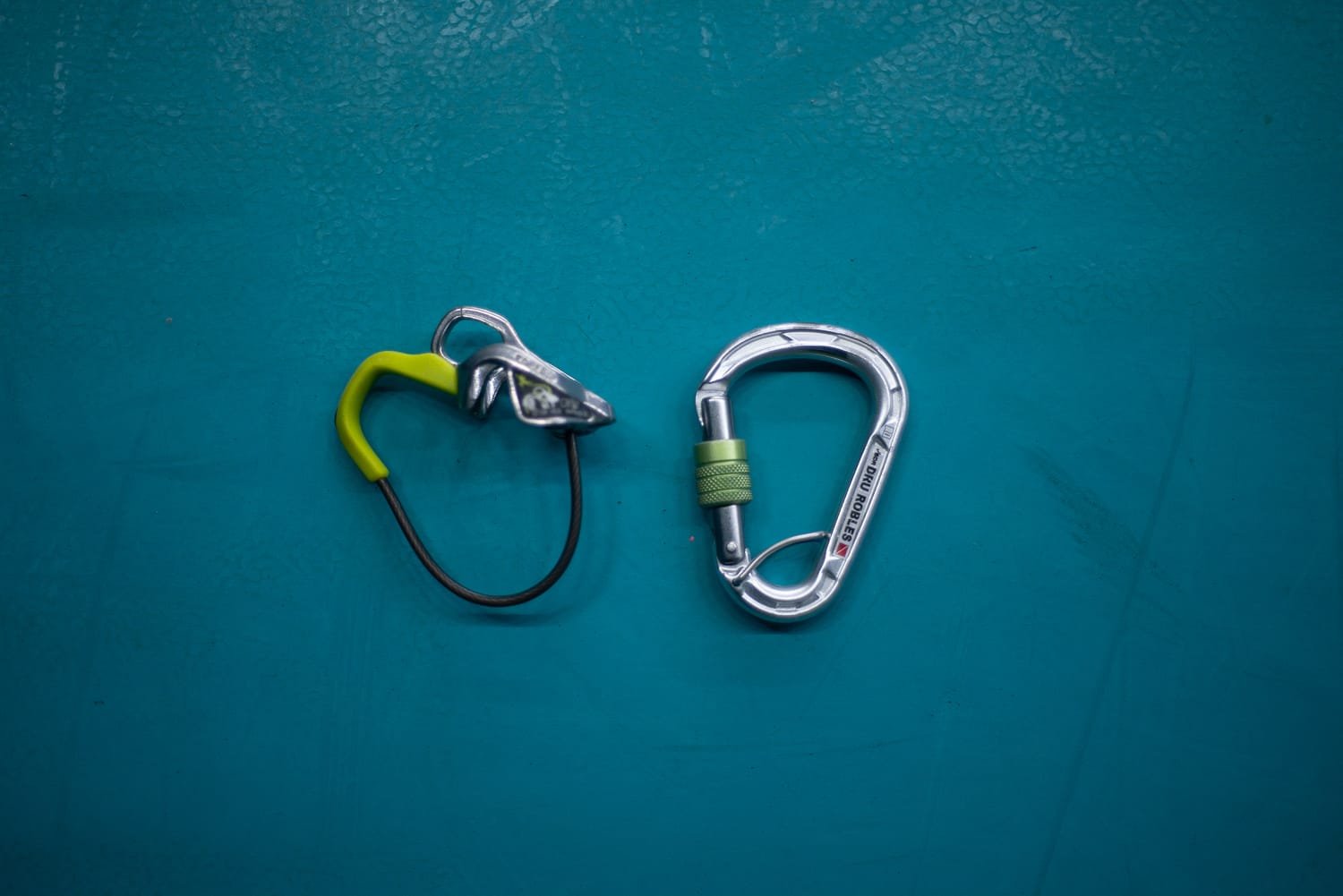 Dru: So far it’s the most versatile belay device because it’s assisted belay, but it’s also a tube device. It’s an assisted belay device and at the same time pwede ka mag double rope rappel. It’s not perfect for rappelling, but it works. Usually, when you rappel, you can’t let go of your brake line otherwise [you’ll fall]. So with this one, it still works as an assisted braking device while you’re rappelling. 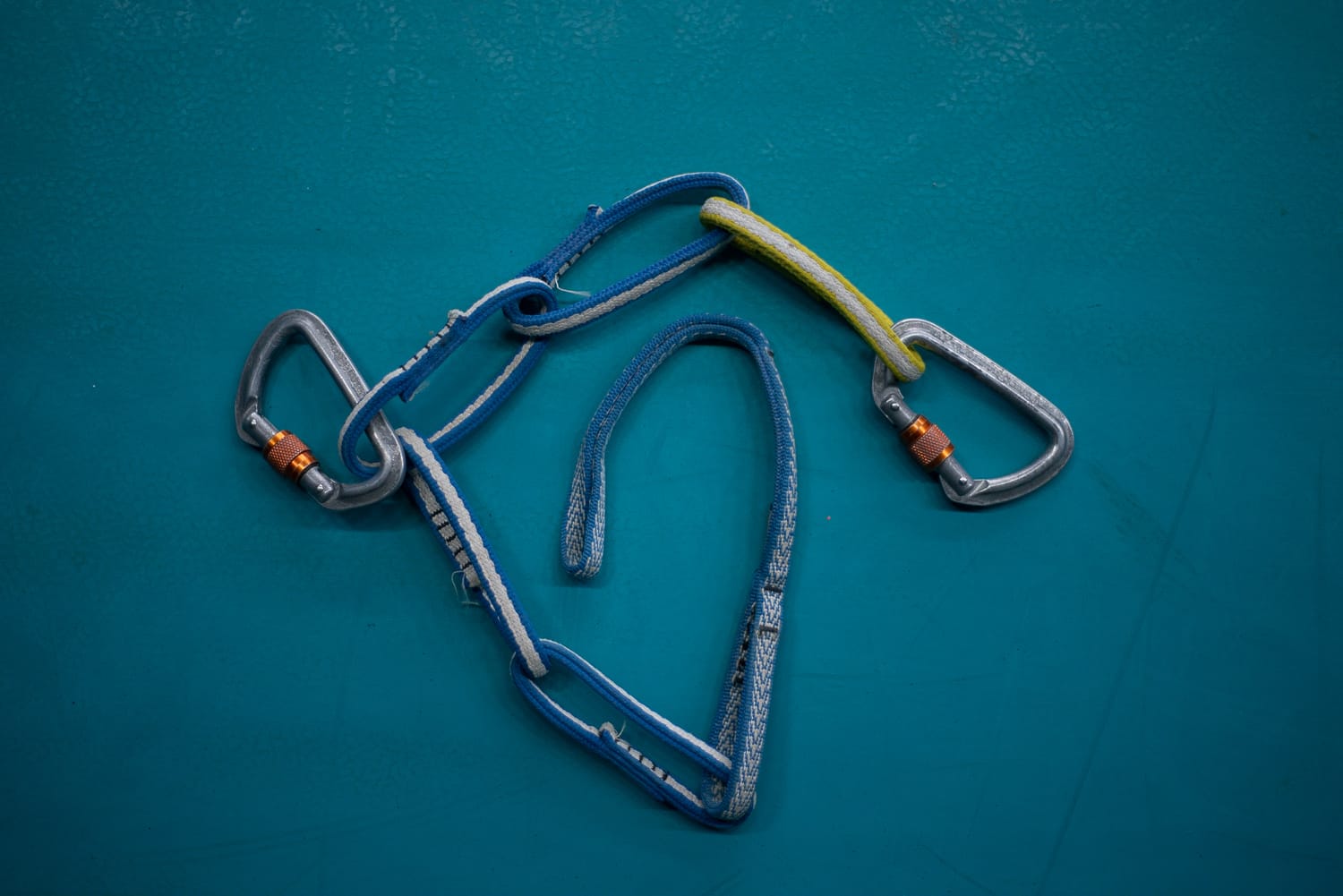 Dru: It’s also very useful and versatile because each loop is supposed to be as strong as your belay loop. It’s stronger than a daisy chain, basically. More reliable. And even if you only have one anchored, then it’s supposed to be good enough not like daisy chain or sling na dapat dalawa o tatlo. So this one, you can use the same chain and then anchor it on two points and it’ll be strong enough.
Send: What do you use that for?
Dru: On a normal crag day, usually for retrieving but also it’s good for multi-pitch, it’s good for routesetting. 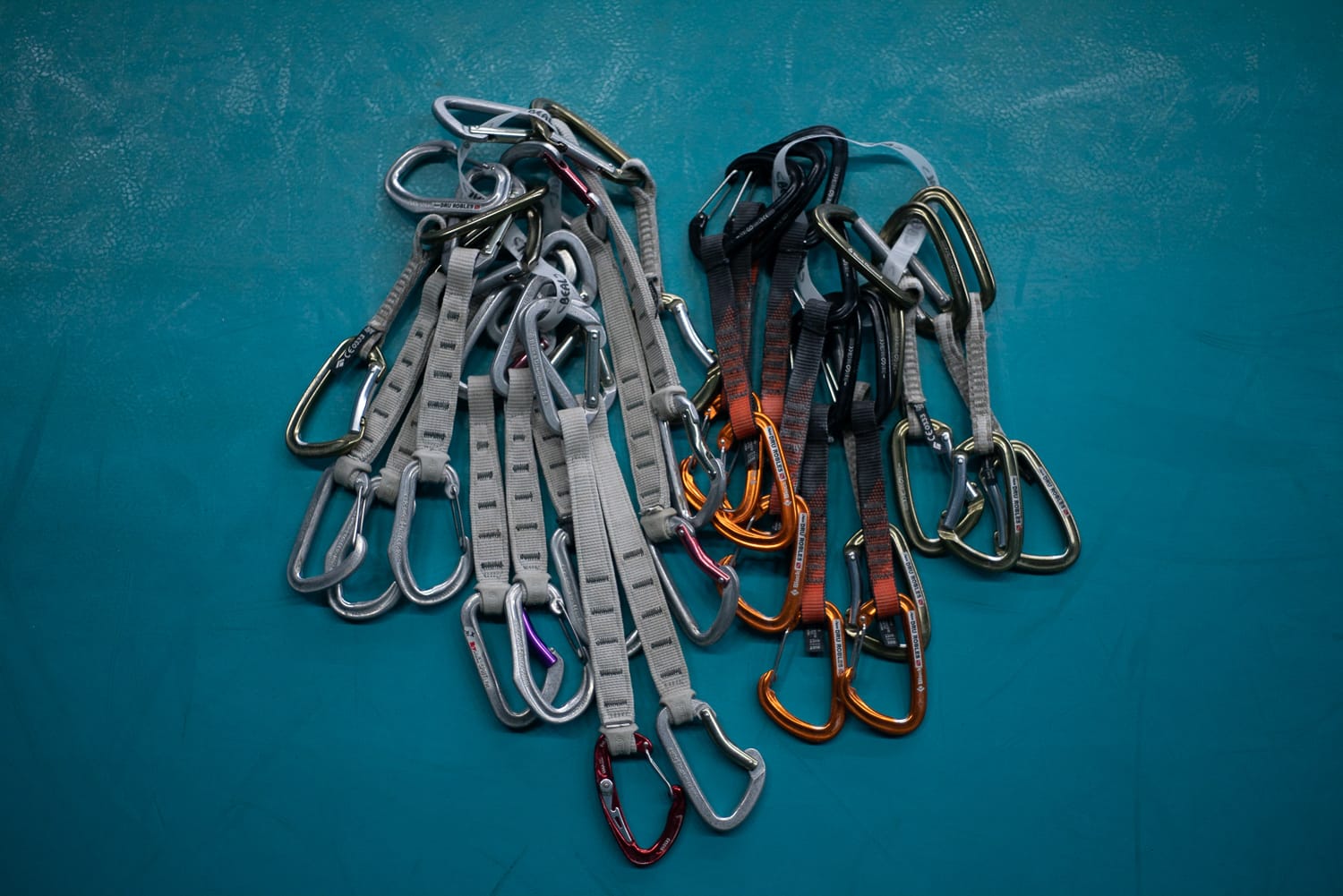 Dru: I came from monkey wall so I brought all 22 quickdraws
Send: 22!
Dru: Yeah, because the routes are really long there. And then I have a set of 10 that are really really old so I replaced the runners. I’ve had these for 10 years but I bought them second hand. 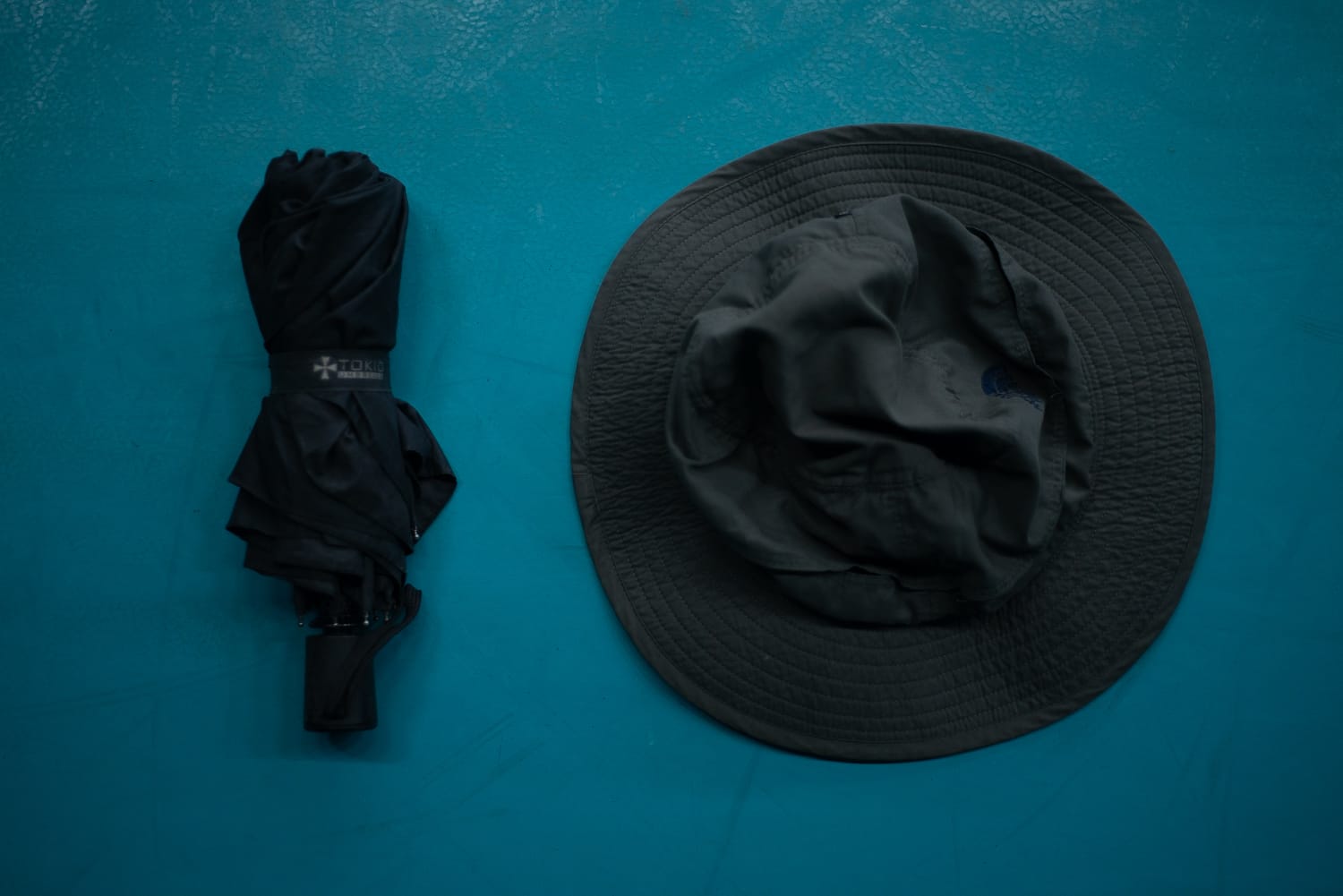 Dru: Monkey wall is a really sunny crag so it’s nice to have a wide brim hat. Even if you try to avoid the sun, minsan you can’t avoid the climbing day extending, so it’s useful if you really have to belay under the sun. 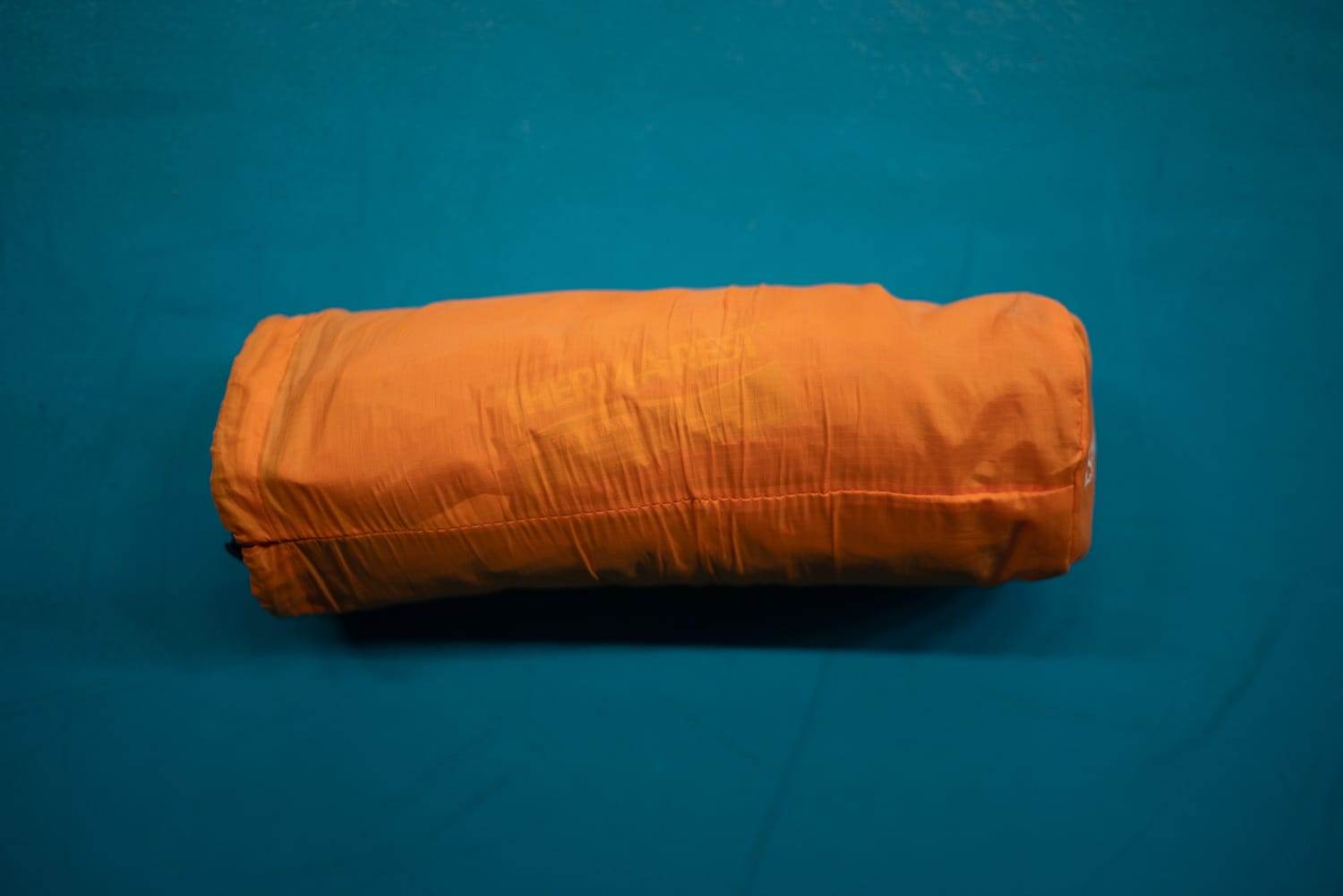 Dru: Thermarest because I’m old.
Send: What’s a thermarest?
Dru: It’s an inflatable mat.
Send: Like a banana boat?
Dru: Not that inflatable, it stays flat, but it has a little air cushion. It’s just for lying down or sitting down. 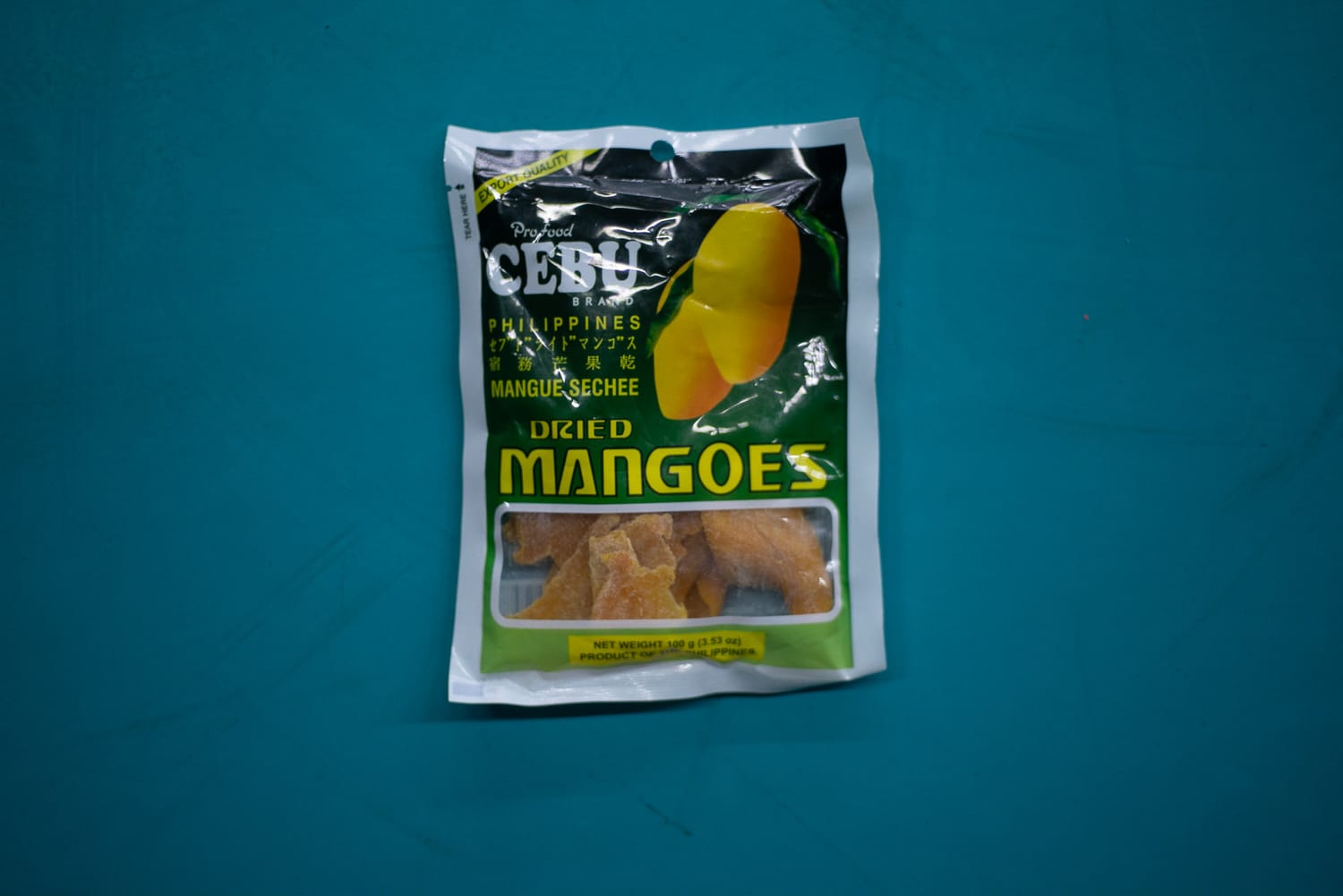 Dru: Usually, I bring dried mangoes or dried fruits. My favorite is actually dried mango plus dried cranberries- I mix them together. Sometimes I cut it up so that it mixes really well. Cranberries are sour and the dried mangoes are sweet so it’s a nice combination. So geeky. Mixed nuts are also nice. 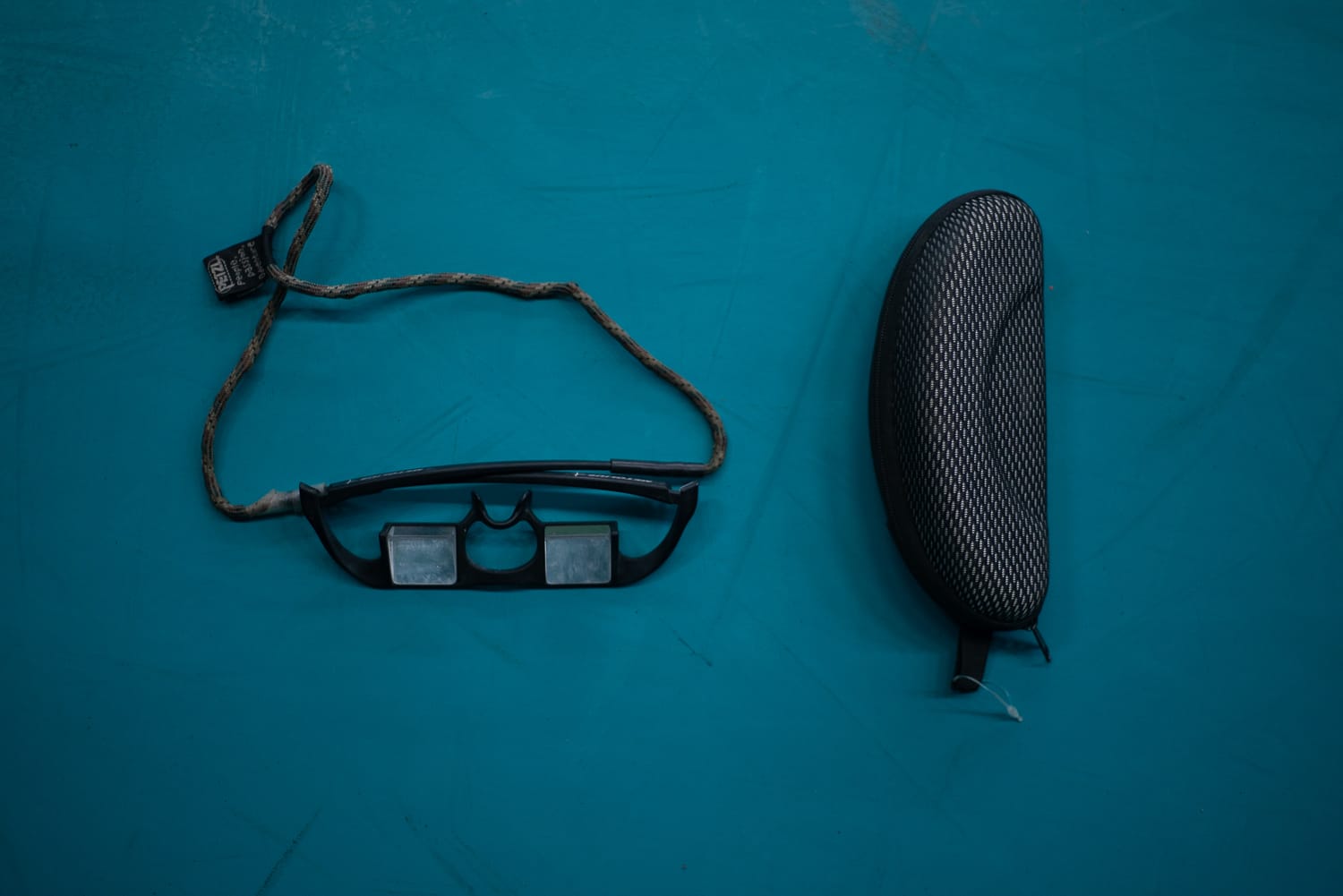 Dru: Belay glasses because I’m old. [If you wear these], you don’t have to look up. You can belay without straining your neck.
Send: How long have you had your belay glasses for?
Dru: This year lang. Around May, we went to Canada so I bought a bunch of stuff. I bought the thermarest, I bought the belay glasses, stuff for old people. Stuff for comfort because I’m old.
Send: You’re not that old.
Dru: And trekking poles.. I bought, like, for my knees. Because I’m old.
Send: You bring trekking poles?
Dru: Sometimes, if I’m going far or if I have a heavy bag.
Send: But not for climbing?
Dru: Sometimes, yeah.
Send: Because you’re old?
Dru: Because I’m old. 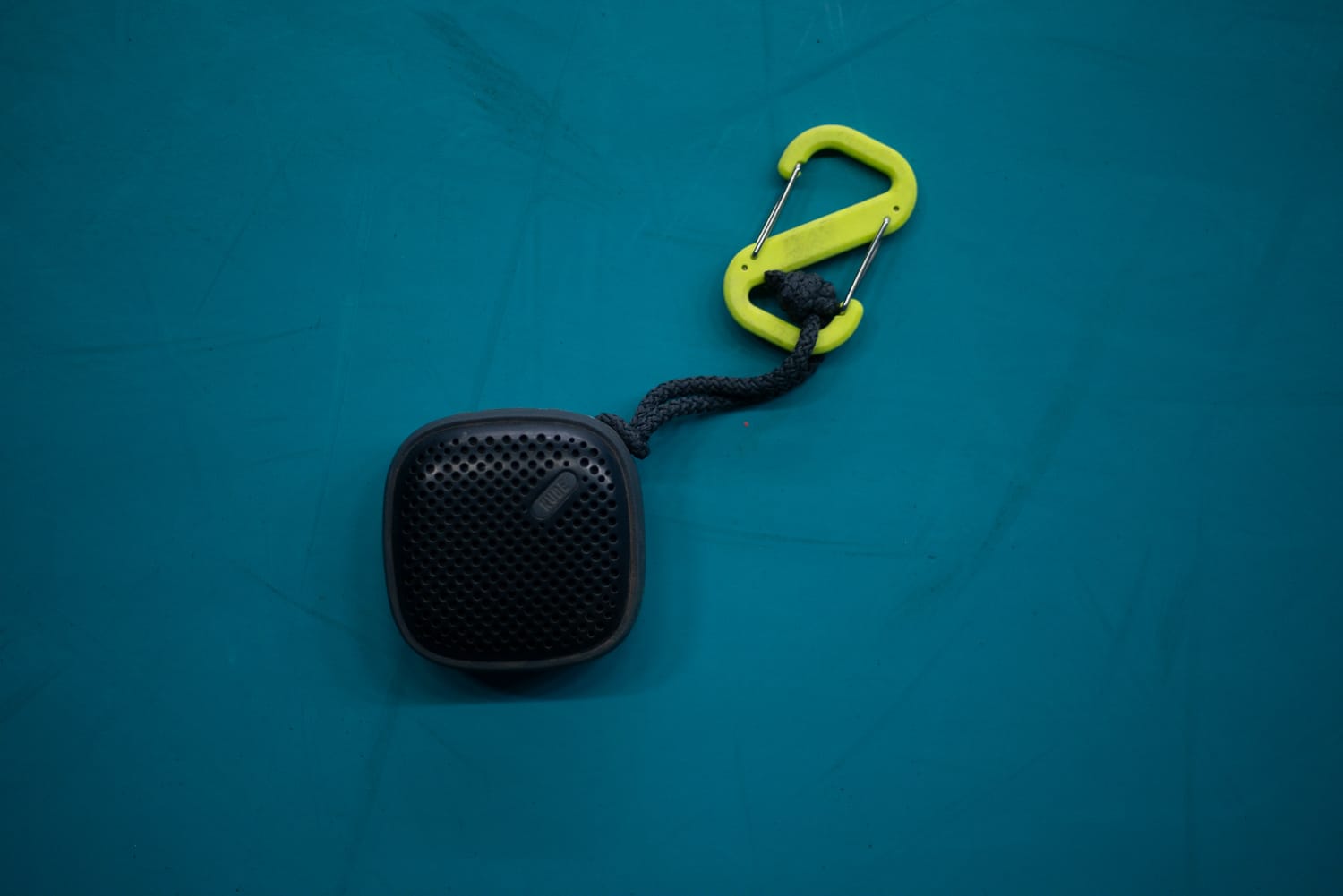 Dru: I always bring them but I don’t always play music because nahihiya ako minsan.
Send: Why?
Dru: I dunno. When other people have music, I ask them if they wanna play their music before I play mine. 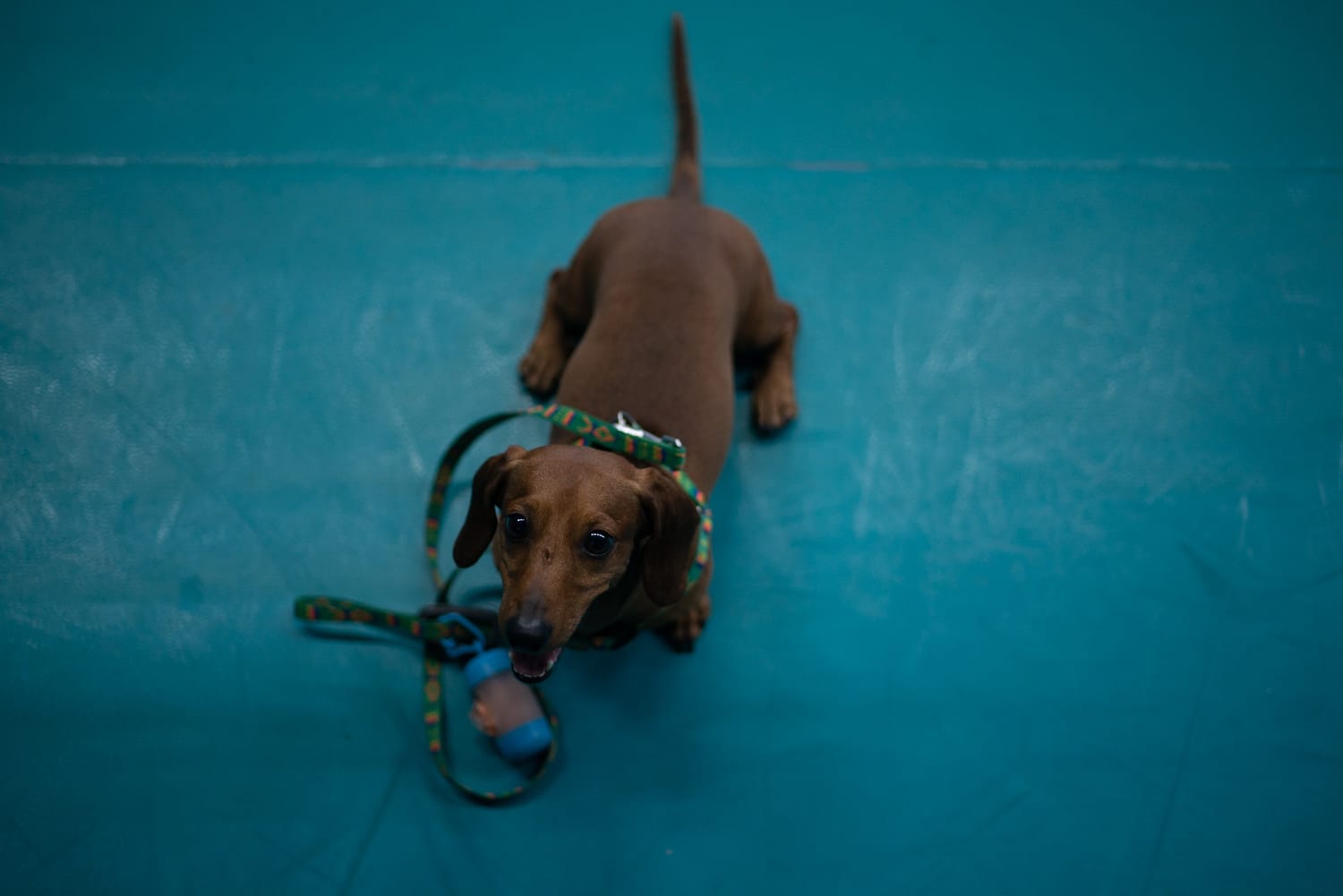 Send: Do you always bring Bean along when you climb?
Dru: As much as possible, we don’t like to leave him.

What’s in your bag? is a recurring feature where we ask climbers to tell us a bit more about the items they use in their climbs by opening their bags and themselves to us.